The 2015 Ford C-Max and Toyota Prius are two hybrid vehicles that drivers seek out for greater savings at the pump. The Prius, which is now a household name, is famous for its best-in-class fuel mileage. However, buying a vehicle shouldn’t come down to fuel economy alone. The competitive Ford C-Max is a hybrid that offers impressive EPA ratings and, even better, is fun to drive. Read on to see how the C-Max stacks up against the Prius. 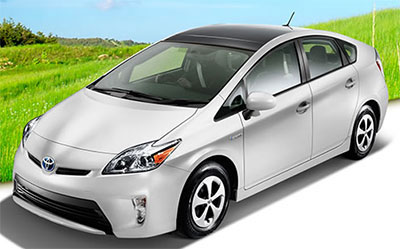 It’s hard to beat the Prius’s top-notch fuel numbers. Its 1.8-liter four-cylinder engine works with a pair of electric motors and generators to produce 134 horsepower. The powertrain is EPA-rated for 50 mpg combined and 51 city/48 highway mpg.

However, the C-Max isn’t far behind. Its 2.0-liter four-cylinder gasoline engine is paired with a lithium-ion-battery-powered electric motor to generate 188 horsepower. It achieves 40 mpg combined, or 42 city/37 highway mpg. 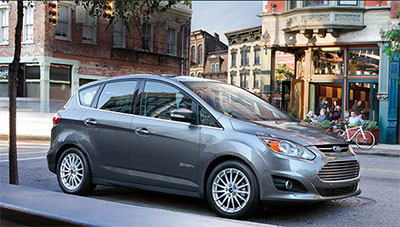 When it comes to modern conveniences, the C-Max has the edge over the Prius. With its two trim models – the SE and SEL – the C-Max delivers a long list of features in two concise packages. The base C-Max SE is well appointed, with high-tech standard equipment that includes timesaving keyless entry and a 60/40 split-folding rear seat to increase cargo space. The Sync voice command system allows drivers to stay connected while keeping their eyes on the road. A wealth of infotainment options is available, thanks to Bluetooth phone and audio connectivity and an iPod/USB audio interface. The C-Max SEL comes with an impressive array of features. Ambient interior lighting sets a modern, youthful tone. Leather upholstery maximizes passenger comfort. Heated front seats keeps passengers cozy in winter weather. Many of the SEL’s features are available as options on the SE model. SEL drivers, however, can choose to add a variety of exclusive feature bundles, including the 302A package, which adds a rearview camera and a liftgate that opens when the driver swipes his foot under the bumper.

The Prius is available as five different trim models, named the Two, Three, Persona Series, Four, and Five. The base Two is equipped similarly to the C-Max base SE, with features like Bluetooth and automatic climate control. Moving up through the trim models will allow drivers to slowly build a hybrid as well-equipped as the C-Max SEL, but we like that the C-Max gets there in just two models.

They may save money at the gas pump, but hybrids have a reputation for soulless driving dynamics. The C-Max breaks that stereotype, delivering responsive handling and a refined ride. Its communicative steering is another best-in-class characteristic. Compared to the Prius, its cabin is quiet and peaceful. When it comes to driving dynamics, the C-Max comes out on top.

If it’s a little sluggish compared to the C-Max, the Prius offers adequate acceleration. Prius drivers can choose between four driving modes: Normal, Eco, Power, and EV. EV is the most fuel efficient, but it also represents the Prius at its most measured and slow. Although the Prius is easy to drive around town, steering isn’t highly responsive. Cabin noise is a constant, too, no matter how fast or slow the Prius is moving.

Although it was a close race, the C-Max is our pick in this category. In government crash tests, both the C-Max and the Prius earned four out of five stars for overall protection. Both also earned four stars for frontal protection and five for side protection. In Insurance Institute for Highway Safety testing, both models received the highest score of “Good.”

The C-Max comes standard with 911 Assist technology, which, when paired to a smartphone, automatically dials emergency services when the airbags deploy. The Prius offers something similar in Toyota’s Safety Connect technology. However, this technology is optional equipment for the Four and Five Prius models only.

Learn More about the Ford C-Max

Both hybrids have a lot to offer, but we prefer the C-Max to the Fusion. Even though it doesn’t beat the Fusion’s mileage, it still offers impressive EPA ratings. And, unlike other cars in its class, it’s fun to drive. Responsive steering and a refined ride are rare qualities in a hybrid. The cabin stays quiet, especially compared to that of the Fusion. C-Max drivers can also expect a long list of convenience features and safety equipment.