The 2015 Ford Explorer and Honda Pilot are both great options for big families who need extra space and comfort. These vehicles are also a top choice for city dwellers who like to head into the great outdoors on weekends. The 2015 Ford Explorer offers a long list of advanced features, a plush cabin, and a strong engine lineup. The 2015 Honda Pilot has impressive cargo space and storage compartments, an adult-friendly third-row seat, and a smooth ride. Read on for a side-by-side comparison. 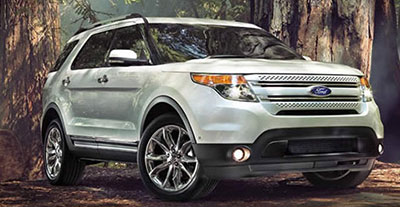 In terms of both raw power and smooth driving, the Explorer has an edge over the Pilot. Its standard 3.5-liter V6 engine produces 290 horsepower and 255 pound-feet of torque. It’s paired with a six-speed automatic transmission for smooth highway driving. Drivers who want improved fuel economy can grab the optional 2.0-liter turbocharged four-cylinder, which produces plenty of power for everyday activities. Four-wheel-drive is optional, and those who choose this option also receive the safety benefits of high-tech features like hill descent control, hill start assist, and Ford’s Terrain Management System. The latter technology electronically optimizes the Explorer’s traction to suit various outdoor conditions, creating a safer ride. The Explorer Sport model comes with a sport-tuned suspension for even quicker steering. It comes with a turbocharged V6 that accelerates like a V8 but gets better fuel economy. Properly equipped, V6 models can tow up to 5,000 pounds. With the 2.0-liter four-cylinder in play, the Explorer can tow up to 2,000 pounds.

The Pilot’s standard powertrain is a 3.5-liter V6 that produces 250 horsepower and 253 pound-feet of torque. It’s paired with a five-speed automatic that powers the front wheels – all-wheel drive is optional. Unfortunately, the five-speed transmission is the main culprit behind the Pilot’s delayed acceleration, especially when entering the highway. Properly equipped, front-wheel drive Pilots can tow up to 2,000 pounds. All-wheel-drive models can two 4,500 pounds.

Here the Explorer wins again. The Explorer’s cabin is notably well appointed and luxurious. Its high-quality materials seem destined for a more expensive vehicle. Drivers can expect supportive front seats, intuitive controls, and a soft-touch dashboard. In back, the Explorer offers a maximum of 80 cubic feet of cargo space.

While the Pilot’s third-row seat is impressively spacious, offering generous room for adult passengers, the cabin is not quite up to par with the Explorer’s luxury. Interior design is functional, but materials seem dated. The Pilot does capitalize on cargo space, however, offering 87 cubic feet with the second- and third-row seats stowed. Passengers can stow smaller items in bins and pockets throughout the cabin. The liftgate’s glass opens separately, allowing longer cargo items like skis and surfboards to slide in.

Families who want more features will prefer the Explorer. The line’s four trims – base, XLT, Limited, and Sport – offer varying levels of style and comfort. In comparison, the Pilot falls short. Its trims – the LX, EX, SE, EX-L, and Touring – don’t offer as many modern mechanisms, a shortage especially apparent in terms of high-tech safety equipment. The Explorer’s base model comes with everything from automatic headlights to a 4.2-inch display screen to interact with various entertainment apps. The midgrade XLT is impressively high-tech, thanks to a wider array of infotainment options, including Sync, Ford’s voice-activated phone and entertainment interface. The top-trim Limited offers time-saving conveniences like keyless ignition and entry. A 110-volt power outlet helps to keep devices charged on the go.

The Pilot LX competes favorably with the base Explorer, thanks to a standard rearview camera and keyless entry. However, many of its optional features are only available on upper trim levels. Midgrade EX-L drivers can choose a navigation system or a rear-seat entertainment system – but not both. With the top-trim Touring model, drivers can choose to install the rear-seat entertainment and navigation systems, but they can’t be installed separately.

Both the Explorer and Pilot come standard with the safety equipment consumers have come to expect – including traction and stability control and an array of airbags. However, the Explorer offers a wide range of high-tech safety systems that the Pilot lacks. Explorer Limited and Sport models, for example, get optional impending frontal-collision warning and brake priming to increase driver vigilance. They can also be equipped with blind-spot warning and lane-keeping assist systems to help drivers avoid careless collisions.

Learn More about the Ford Explorer

Although both of these SUVs have much to offer, the Explorer has the edge. Its crash test scores speak for themselves. Drivers can equip their Explorer with a long list of luxury features. This SUV supplies plenty of power to tow heavy loads or transport big groups of people. It’s also spacious and accommodating, giving passengers room to spread out during long trips.