The Ford Expedition is an exceedingly popular full-size SUV. Since its inception in 1997, this pickup truck-based SUV has attracted buyers with its spacious cabin, hefty powertrain options, and versatility. Thanks to advances in technology, the latest generation is both large and highly maneuverable.

The XLT furnishes all the necessities. A sliding and reclining 40/20/40-split second-row seat enhances passenger comfort. Rear parking sensors help drivers back up safely. Ford’s voice-operated Sync system allows drivers to stay connected without taking their eyes from the road.

The Limited adds a touch of luxury with its leather-lined interior. A power liftgate makes loading and unloading a snap. A rearview camera gives drivers a clear view of what’s behind them.

The King Ranch Expedition has a unique look with its two-tone paint and exclusive wheels. Upgraded leather upholstery and wood accents create the Expedition’s most luxurious cabin.

Inside, all models come with fold-flat second-row seats and power-folding third-row seatbacks that create a flat, spacious cargo floor. The center portion of the second row slides forward to bring a child safety seat 11 inches closer to front-seat passengers. 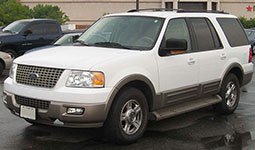 This Expedition combined all the strengths of the previous one with modern tweaks to create an improved SUV. Modern styling gave the SUV a sleek new look. The Expedition’s driving dynamics were improved with an independent rear suspension. This was also the first SUV to provide power-folding rear seats that folded into the floor; competitors wouldn’t catch up for another decade. All models were equipped with stability control for greater safety. 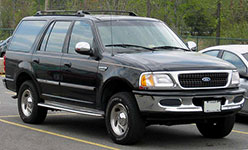 The Ford Expedition debuted to widespread praise. Its initial popularity had a lot to do with its spacious cabin, which could carry up to nine passengers. Two trims were available: the XLT and the more luxurious Eddie Bauer