The Ford Fusion is a mid-size sedan with all the right moves in terms of space, style, and comfort. Since its debut, the Fusion has been the main contender in this highly competitive segment. Families love it for its spacious cabin, fuel efficiency, and modern convenience features. But it’s also fun to drive, thanks to athletic driving dynamics. Solid build quality makes the Fusion one of the safest family-friendly options on the road.

This four-door sedan appeals on every possible level. Drivers can choose from three trim models: the S, SE, and Titanium.

The base S is handsomely equipped. A voice-activated Sync interface gives users hands-free access to both audio and smartphone apps. Users can plug devices into the system using the USB/iPod interface.

The mid-level SE is packed with even more family-friendly convenience features. A power driver seat makes it easy to find the perfect position behind the wheel. Alloy wheels add to the Fusion’s sharp exterior style.

The top-trim Titanium is the most luxurious take on the Fusion. Its sport-tuned suspension delivers a tight, responsive performance. Leather upholstery and heated front seats provide ultimate style and comfort. Drivers can back up safely with help from standard rear parking sensors and a rearview camera. The Titanium also comes equipped with the MyFord Touch electronics interface and an upgraded sound system to maximize infotainment options.

Both the S and SE are equipped with a 2.5-liter four-cylinder engine that produces 175 horsepower. 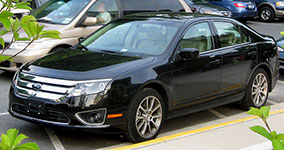 Today, this Fusion lineup is among the best used-car picks in the mid-size sedan segment. It capitalized on the first generation’s strengths and banished its few weaknesses.

These Fusion models hit the market with new exterior styling and an enhanced engine lineup. New blind-spot mirrors increased rear visibility. The six-speed automatic transmission models could be outfitted with a manual-shift feature.

Drivers could choose from four trim models: the S, SE, Sport, and SEL. The base 2.5-liter engine generated 175 horsepower. An optional 3.0-liter V6 engine produced 240 horses. The Sport models were equipped with a 3.5-liter V6 that made 262 horses.

Until 2007, only front-wheel drive was available. In addition to all-wheel drive, a number of other optional features became available for the 2007 model year, including navigation technology. In 2008, antilock brakes became standard and the Fusion began offering Ford’s electronic Sync system. In 2009, stability control became optional for all Fusion models.